2016 Manager of the Year – Most Improved 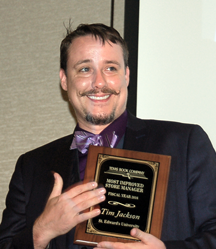 Texas Book Company’s annual awards banquet is always an exciting time for our bookstore managers. Dressed for a party, and gathered with their peers after several days of intense training mixed with a little play time, we honor their achievements and excellent performance. The food, festivities, and comradery culminate in award presentations to the year’s highest achievers. This year, unless a dessert coma had set in, you knew without a doubt that Tim Jackson was in the house.

The 2016 award for Most Improved Gross Margin, with a 6.36% increase, went to Tim Jackson, Bookstore Manager at St. Edward’s University in Austin, Texas. Tim’s impressive gross margin increase included a 23.4% increase in textbook rentals. St. Ed students are the big winner for all of Tim’s efforts and staff leadership.

But wait, there is more….so much more.

Hold your applause. There is more. Each year Bookstore Managers who achieve their budgeted financial objectives are included in the President’s Club Award. Tim Jackson was awarded the President’s Club honor with a 49.88% increase to budget. What makes all of these awards even more impressive is that Tim has only been with TBC, and on the St. Ed’s campus, for less than three years. In addition to the details of day-to-day operations and team leadership, he reached these achievements while learning new systems, developing relationships with faculty and administration, and getting to know the students and campus community.

So you ask, who is this man, Tim Jackson? In Tim’s own words he is “Everyman”. Tim started his career in the textbook industry in 2001 at his alma mater, The University of Houston, where he earned a BA in Theatre. Tim’s journey, and success, in the textbook industry is a true testament to his flexibility and agility. As the textbook industry rapidly evolved, and services became the valued commodity, Tim recognized the benefit of his Theatre training. Tim says his service philosophy comes from lessons learned from the play Everyman, the 15th-century allegorical accounting of the life all mankind. For most mere mortals a 15th-century play is not in our repertoire of knowledge or experience, but for those who know Tim, this reference is no surprise. His service to customers is a direct reflection of the underlying theme of Everyman. He must be responsible for his own good deeds, and serving others is a good deed. According to Tim, “The experience my staff has with the customer is indicative of my management skills. My goal has always been to treat every person who enters my four walls with the same respect. I make sure my staff embraces this mantra. Whether you’re a plumber or the provost you should be given 100% of my attention. Budgets are easy to achieve, but finding that subtle balance between nuance and nuisance is critical to having every customer feel appreciated.”

When Tim is not working, he unwinds with a video game. He has volunteered for Houston Area Women’s Center, and in high school was as a “Natural Helper”, trained to recognize and help students suffering from suicidal tendencies. He comes from a small, close-knit family with one brother. Tim’s wife of 11 years has a very large family, so he gets to enjoy “tons” of family members, with nieces and nephews whom he adores.

Tim is known at TBC and on St. Ed’s campus for his flamboyant style, which includes an impressive collection of bow ties. Tim credits his dad, Jim Jackson, for his zest for life and ability to find joy in every moment, no matter how difficult it may seem. Tim definitely is a very energetic bundle of happiness, good humor and hard work. When talking about his customer service approach Tim shared a bit of wisdom and humor. “Every time a student is not satisfied with our products or services I vigorously explore how we could have done better. If every business would operate with this basic objective, I’m sure we all would love to visit the D.M.V.”

Congratulations to Tim Jackson for an outstanding 2016.